Folds are the marks of a past transition. They become visible in the act of unfolding a surface, and remain as the visual reminder that this surface has temporarily been else-where and invisible. Usually we unfold a surface either to cover something (a tablecloth to put on a table, a sheet to cover a mattress, a blanket to cover ourselves, etc.) or in order to read (a newspaper, a letter). In the first instance we unfold fabric, in the second, paper. While the Airmail Paintings include both of these aspects, particular attention is drawn to their existence as letters. First and foremost, the folds emphasize that the painting was sent from a different location and by extension, that it was made in a different place and context from the one it is seen in. The latter, of course, is true of most art in museums and galleries; in Dittborn’s work, however, the passages inscribed in the paintings suggest that each arrival is also a (potential) point of departure, and that each departure includes a possible return. What has been called “airmailness” of the paintings articulates a particular temporality of transit which can be distinguished from both the linear time of history and project, famously attacked by Walter Benjamin in his Theses on the Philosophy of history, and from mechanistic notions of reversibility. Here, the sending out and return to sender is neither a reversal between two states, nor the synthesizing movement of a dialectic.

The Airmail Paintings unfold in several directions simultaneously, each of which involve specific and different time frames. I want to make reference to three particular moments inscribed in the work first, the specificity of Latin American art, secondly, the Chilean context, and thirdly, the signification and significance of the work in the theoretical and institutional context of contemporary art in the metropolis. 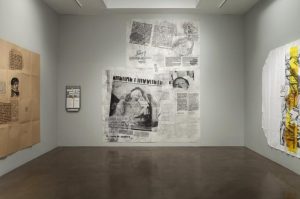 It has been pointed out repeatedly that there is no such things as Latin American art. This is true in one sense and false in another. Notwithstanding local differences, the legacy of colonial history has produced identifiable patterns across national and regional boundaries. Octavio Paz among others has argued for a Latin American literature in terms of a convergence of the European and the American:

Our roots are European, but our horizon is the land and history of the Americans. This is the challenge that we confront each day of our lives and that each of us must meet in his own way. Latin American literature is simply the sum total of answers, each of them different, that we have given to this question put to us by our original conditions.

The same can be said for Latin American art. The much commented on hybridity of genres and styles, the coexistence of different temporalities, and multiple signs of discontinuity and rupture in Dittborn’s work, may be understood as to some degree inherent in the original condition Paz refers to. In this sense the work relates to an experiential level grounded in a history and its vicissitudes which, some may argue, inaugurated modernity precisely as a rupture in the conjunction of a “civilizing mission” with its legitimizing discourses, and the most extreme forms of state power on an unprecedented scale.

Latin American art developed as an art of mediation and translation, of the traffic between cultures, and the effect of time gaps between departures and arrivals. Origin and originals were located at a distance in Europe, and in their transport to the Americans, an insurmountable split became constitutive of artistic representations which doubled as signs of cultural regulation even when they where not explicitly didactic. Take the example of colonial painting which Dittborn has commented on in relation to his own work.

Those paintings, especially of the eighteenth and nineteenth centuries, typically combine religious images with writing. The text often functions as a caption which doubles and details the scene in the picture for an audience presumed to be ignorant of Christian iconography. While the doubling works to reinforce the message, religious or other, it inadvertently also indicates a measure of anxiety that accompanies the clearly perceived instability of the visual sign. 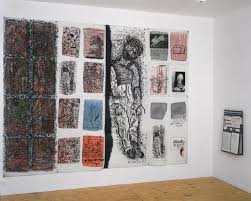 The Airmail Paintings cannot be reduced, however, to a cultural and historical legacy premised on “this traffic of the truth where the truth is the truth of traffic.” What occurs across these paintings is a doubling of allegories of transit with allegories of human transience, and it is in the correlation of these two themes that the work claims legibility. Some of the images frequently used in the paintings are of violent or accidental death: a motorcycle accident, the death of a boxer, reproductions of the print The man hanged by landowners by Jose Guadalupe Posada, and images of dead bodies preserved almost intact in ice, salt or sand, such as the Inca mummy of Cerro El Plomo, the body of the English Sailor John Torrington, and that of a political victim found after seventeen years in the desert in northern Chile. A photograph of the artist’s newborn daughter includes in the caption a reference not only to the beginning of a “journey through the world” but also to death, “This [the birth] took place on the first floor of the same hospital in which my father died on December 4, 1979 at 6 P.M. on the fifth floor” (Airmail Painting No. 90: The Corpse, the Treasure). This emphasis on death parallels a concern with the photographic image in particular, as an ossifying and mummifying process. In the preservation of death beyond the moment of dying, the photographic image recreates a shared existential condition as spectacle and artifice.

This movement is conspicuous in Pieta, an early Airmail Painting of 1985. The image, which also appears in previous and subsequent works, shows the pain-ridden body of the Cuban boxer Benny Kid Paret stretched on the canvas in Madison Square Gardens in New York. Broadcast on American television, a U.P.I. photographer shot the still from the screen, and the Chilean magazine Gol y Gol acquired the image from the same agency and printed it in 1962. In the late seventies, Dittborn came across an issue of the magazine in a secondhand bookstore in Santiago and started working with the photograph, transforming it further through enlarging and reprinting.

The pieta forms part of a visual narrative of life and death which includes in its representations a temporal dislocation in symbolic prefigurations of death. (6) More generally, and retroactively, the celebration of popular heroes as “living icons” may well be understood as anticipating their survival as an image.

The Airmail Painting Pieta allows the viewer to trace the different stages of the picture’s journey, while the title points to another tradition of transforming death into image and spectacle. In the religious context, however, pieta also reminds us of something conspicuously absent from its secular versions, the emotions of pity and of mourning which involve memory based on the recognition of loss.

In this context, the Airmail Paintings as unfolded letters relate to a rich tradition in European painting. In this tradition in writing figures prominently as part of the painted composition in order to establish a connection between transience and death, and memory and remembrance. In 1644, Cesare Ripa’s Iconologia already lists “writing” and “the book” as attributes of both memoria and historia. In Dutch vanitas still lives of the seventeenth century, the unfolded letter frequently appears alongside the opened book. Unlike contemporary genre scenes which depict the writing of letters, here the letter is displayed as unfolded to indicate that it was sent, and has arrived from a scene outside of the one depicted in the painting. With the emergency of vanitas still lives as a separate category of still life painting at that time, the inclusion of writing and particularly of the letter into the composition signals a shift in the understanding of visual allegory. Writing, the open book, individual pages of texts, and unfolded letters, can be distinguished from other allegories of transience such as the skull, the burning candle or the hourglass. Reading takes time. The texts tell stories; they narrate events which themselves have allegorical dimensions. Writing already involves intention, interpretation and (mis)understanding, in short, it inscribes a relation between human subjects. The book sets out a relationship between author and reader, the letter between sender and addressee. The writing depicted in these paintings, therefore, can never be regarded simply as an object in the way burning candles or a skull can be regarded as objects. While the letters and books in the vanitas paintings clearly function as attributes, they also multiply and thereby complicate and disturb the allegorical reading. The text of the unfolded letter or the open book which is legible in and as part of the painting can no longer be regarded only as part of a pre-established allegorical vocabulary. The prominence of writing in these allegories of transience and human death, while reminding us to remember that time reading of the painting itself includes an aspect of the transitory, as the relationships within and between the elements in the work no longer unfold strictly within the timelessness of its theme.

The citations, the captions of photographs, and visual inventories in Dittborn’s work present a collection of fragmented allegories. They appear as ingredients to a dish which cannot be cooked because the taste of each ingredient, instead of blending, would interfere with and cancel the others. Technologies of visual communication and the traffic in images is shown to diminish and expropriate the space in which secure identifications can be made. In their unfolding, the paintings offer a surface without frame across which we attempt to link associations clearly relative to our own location. Only temporarily and partially do we cross paths with this work, and yet, in its emphasis on mortality, transit and the faces that despite all mediation still meet our gaze, we are confronted with the intimation of human communality as a being in common that can only be articulated terms of a distance from others. Despite the loss implied by this, or perhaps because of it, we are able to acknowledge others. This acknowledgement proposes a relation that is not determined by our ability to forge a common identity. Nonetheless, it is a relation to other subjects, and to locations and moments different from our own.