Images of faces, a house, a hanged man. More faces stitched onto the painting, and a mummy. Children’s drawings, dead bodies. Texts. Captions. Folds. A raft, yes I remember a raft also, stitched onto colour stains and drips along with footprints, a snail, and a house. But when I think of the different Airmail Paintings I have seen over the years, the faces predominate. And a particular sense of lightness which has to do with the materiality of these paintings on white, non-woven fabric, or brown wrapping paper — paintings that are unfolded rather than stretched, and which announce in their folds another mode of existence as letters sent through the post in airmail envelopes.

It takes time to look at this work, time to read it. Here looking is already a kind of remembering. As you walk along the frieze-like rows of images extending along the wall in the History of the Human Face, for instance, but also when you look at a single sheet piece such as Pieta, seeing elements the conscious experience and memory of attempting to correlate different elements that do not integrate into a single vision. Hence the memory of encountering this work as repeated moments of looking, of following traces and leads in the folds of these gatherings of images, out of envelopes onto gallery walls, and yet always in transit. Moments of contact that yield no synthesis, no revelation, or other point of narrative closure.

I remember my excitement the first I came across Dittborn’s work. The beauty and intelligence in its immodest use of cheap and found materials, its insistent seriousness all the while playfully manipulating established formats and techniques. I find these paintings deeply moving and intellectually challanging at the same time. In part at least, the challenge they present is to understand their affective power. In what follows I want to concentrate on this relation which, initially, may be formulated as a question. How can we articulate visual pleasure when it is so closely bound up with the transitory, this ceaseless oscillation between the mirage of identity and the non-identical?

Every element in the Airmail Paintings is multiply mediated. Found photographs from different sources are re-photographed, sometimes repeatedly xeroxed, enlarged and photo-silkscreened onto industrial non-woven fabric, normally used for lining and stiffening jackets. Fragments of texts are enlarged, drawings are transferred from personal diaries, art history books, and “how to draw” manuals. Continuous lines are both suggested and broken in the stitches which hold in place further elements while drawing attention to the work’s materiality, halfway between fabric and paper. On the envelopes exhibited as part of the paintings, every journey they have made is carefully recorded. In this way the specific yet shifting relations of each element to its source or origin is emphasized, in fact the very notion of origin is recast as a simulacra of the image’s traffic and travel through different media, times and places. As one perceptive commentator on Dittborn’s work put it:

[W]hat emerges is a paradoxical insight. The work makes absolutely specific its point of origin and destination in time and space, and at the same time intimates that there is no absolute point of origin and destination. It rescues a notion of the local, only to show that the local, like the global, is an abstraction, the conjunction of many planes of experience and time scales. Conversely, it ranges the global and participates in the international “research community” of the artistic vanguard, only to point out that it is the product of a specific cultural history.

What then is the pleasure we take in these works which draw us into their visual field without allowing us to settle there and inhabit them with our ready-made concepts and ideas? How do we look at those faces from police files and anthropology books of people long dead, anonymous, killed off, given European names for the record, their “identity” the product of social technologies? How do we measure the distance of these remote faces which nonetheless touch us?

In his work, Dittborn stages the human face as the site of an extreme and irreducible encounter. In the juxtaposition of photographs, police artists’ renderings and drawings by his seven-year-old daughter, the face is emphasized as (con)figuration. Cognitively, a photographic portrait and a circle with two dots and a line both register as faces. Yet we immediately begin to differentiate. A face is never simply a face. Even in the most fleeting encounter we look for expression, which is to say that we look for difference from, and excess to the configuration of simply “a face.” This difference can pertain to a collectivity, an ethnic group for example, or to individual difference, recognizing a particular person. It can pertain to internal states and emotions: concentration, sadness, alertness, apathy; or respond to something external: staring, frowning, laughing at. To look at a face is to look for a way to measure the distance, not between some pre-existing reality and its subsequent representations, but within the folds, seams and stitches of the configuration which constitutes a face. To look at a face then, is to look at and for something that in its very nature never coincides with itself. 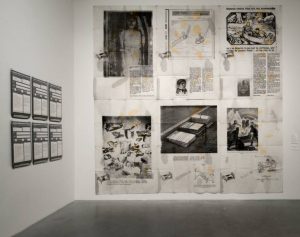 To Return (RTM) Airmail Painting No.103 1993 Eugenio Dittborn born 1943 Presented by the Latin American Acquisitions Committee, with funds provided by the American Fund for the Tate Gallery 2004 http://www.tate.org.uk/art/work/T11828

The predominance and particular arrangement of faces in the Airmail Paintings, I want to suggest, point us in a direction where notions of transit, and of folding/unfolding, begin to cohere around a particular relation that is established vis a vis the face. When we look at a face we do so as subjects who themselves have and make faces. No matter where and how we come across the History of the Human Face (begun in 1989), our own face makes us party to that history. Yet, we do not recognize ourselves in the other’s face. As Roberto Merino put it, “these printed gazes are equivalent to fossilized light – the light that reaches us from the stars long after they have been extinguished.”We do not identify the faces (we identify particular representational formats and techniques), even less do we identify with them. What we make out instead is the gap that separates us from those faces, and a displacement which occurs with respect to our own location and identity. Thus, it is precisely in what forges our common humanity, that the limits of identity and the identifiable are most strongly felt.