Louise Wilson and Janet Cardiff’s installations elicit he direct physical participation of the viewer. Part show & tell and science lab, this exhibition brings us into tactile intervention with the mediation of technology and the clumsy reality of our somatic roles within it.

Wilson’s recent body of work has been significantly influenced by her participation as a subject in psychological and neurological experiments. Having placed herself in direct experiential contact with science (instead of through a secondary source such as literature) in order to arbitrate the human element within its configuration, she has opened up a virtual Pandora’s box. The fragile, unpredictable emotional self, often obfuscated by scientists when dealing with humans as subjects, is placed onto the operating table for dissection.

To be a subject in science is to abandon the ego to the empirical process of verifiable “truths.” As a subject in an experiment one becomes the signifier of the norm (as opposed to a unique individual) and yet a unique trace from every subject is accountable in the end results. In the installation Possessed (1995), Wilson coalesced psychoanalysis and hypnosis with computer body imaging. The viewer was invited to step up onto a wooden platform dressed with an Oriental-type carpet and a dark burgundy divan which aesthetically alluded to the psychiarist’s office. The viewer could then recline onto the divan to watch a video from a television monitor hanging in very close proximity to their faces. 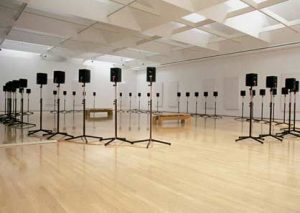 A fifteen minute video session showing the location of “pain” and “visual activation” in a composite brain image, overlaid with hypnotic verbal commands, lulled the viewer into a meditative state. This technological apprehension of the self (or brain) lured the viewer into believing in the video’s interaction with the hypnotic process. (For example, in one stage of the hypnosis the viewer is told to erase a red “target” mark situated on the brain image. As the red fades away the viewer has the illusion of having mentally suppressed, or erased, the red.) The use of hypnosis with imaging technology in this piece links psychoanalysis (Freud used hypnosis in the early stages of his development of psychoanalysis) with modern neurological imaging research. By buttressing these two quintessentially influential projects of modern self-understanding, Wilson emphasizes how humanistic and philosophical projects are at play in scientific inquiry.

In the winter of 1994 Wilson participated in a study entitled “The Role of Vision and Neck Inputs during Adaptation to Motion Sickness” that took place at an Aerospace Medical Research Unit in Montreal and utilized equipment soon to be aboard the Space Shuttle. The experiment required that the subject, after thirty minutes of self-generated motion sickness enhancing movements, try and fix the memory of a black target seen only moments before. The artist had portable computers attached to her head and back in order to monitor her movements while the experiment, which took place in the dark, was filmed in infrared light. A similar experiment was also executed with a monkey subject, where one of its brain cells was monitored on a video screen while the animal responded to visual cues. 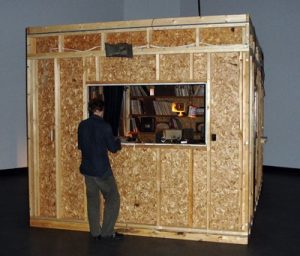 Abulia (1996) re-presents this experiment through the engagement of the viewer as subject. The title, describing a form of mental disorder involving the loss of volition, helps to identity the experiment’s stultifying effects. At the entrance of the exhibition space are placed a small table, with a night lamp, video monitor and a documentation binder. The monitor shows the mapping of something which, by reading the documentation, can be deduced as being the monkey’s activated brain cell. Behind the wall is a dark and coldly lit room with a small pedestal placed in the centre, permitting the viewer to step up onto the elevated level. From this vantage point the viewer can face a monitor on either the left or the right and is invited to slip on a pair of earphones. On the monitors we see the artist participating in the experiment, in a neck brace, turning her torso from right to left in order to induce motion sickness. Each monitor is intermittently interrupted, forcing the viewer to turn their head side to side in order to follow the experiment. Via the earphones can be heard the jargonized monotone of the technical directions from the experimenter which seldom corresponds to the actions taking place on the monitors. A ticking noise prompts the viewer/subject to switch from one monitor to the other and as the interruptions, and hence rotations, accelerate and slow down the viewer realizes that he/she is monkeying the experiment.

The installation is far from polished, leaving gaps, and frustrating fissures in the viewership process. The popular media image of the hi-tech scientific research lab is usurped by a rudimentary laboratory environment which needs the physically laborious input of a subject. Wilson demonstrates how humans, as awkward and difficulty regulated subjects, are integral to scientific research and influential in the results. (The relationship of the experimenter with his/her subject is analyzed in interviews conducted with the experimenters and are available for consultation.) By making her viewers acutely aware of their roles as subjects (willing or otherwise) Wilson demonstrates that they are inextricably tied to the research process and that technology remains a very new way of self-learning, especially when probing our bodies. 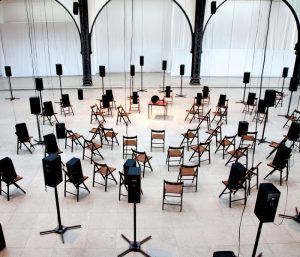 Janet Cardiff’s installation, To Touch (1993), presented in the main gallery, is also dependent on an intimate physical exchange with the viewer. A dimly illuminated and weather worn work table is the sole object of the exhibition. The artist invites the viewer to touch, and set into motion, a series of audio recordings emanating from the twenty speakers placed on the walls around the room. We hear the turbulent thoughts and dreams of different subjects (four in all) and must piece together the narrative by the repeated rubbing of the table wherein our hands become channel surfing antennas. Fragmented texts are overlapped with sounds of ringing telephones, thunder, rain, knives being sharpened and carnival music, making the stories impossible to follow. A pervasive frustration is felt by the viewer who, having understood the mechanics of the piece, remains unable to follow the stories through to their conclusion. If one desires to be closer to the remote speakers to better distinguish the narrator’s voice, one must move away from the table, and lose all physical contact and interaction. Therefore, the control that the viewer exerts in the construction of piece is repeatedly being negated in the process of its fabrication. This piece, relying on postmodern deconstructive tactics, stutters and circuitously runs on its own treadmill regardless of the viewer’s tender cajoling of the table surface.

In these installations we are required to interact with technology, and at times we sense that the machines have understood our gestures whereas at other times we are befuddled in our attempt to understand theirs. This courtship of our body with technology (and its mediated self) requires much patience and in the process we may learn to recognize the iconology of our mutual gestures as we tip our hats to one another.